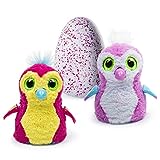 Add to cart
Rating:
Amazon Price: £85.84 (as of January 24, 2020 8:41 pm – Details). Product prices and availability are accurate as of the date/time indicated and are subject to change. Any price and availability information displayed on the Amazon site at the time of purchase will apply to the purchase of this product.

Hatchimals are magical creatures that live inside of eggs. Who’s inside? It’s a surprise! Each egg contains one of two interactive Hatchimals. Love and care for your’s inside the egg and its eyes will light up as it makes cute sounds, telling you how it’s feeling. Once you’ve played with it enough, you’ll see rainbow eyes and that means it’s time to hatch. Hatchimals can’t hatch on their own, your touch encourages them to peck their way out of the egg. It’s a once-in-a-lifetime experience. Now you get to raise your furry Hatchimal through 3 stages, from baby to toddler, to kid. Your Hatchimal sings ‘Hatchy Birthday’ each time it enters a new stage. Teach your’s to walk, talk, dance, play games and more. It will even repeat what you say in its own voice. Hatchimals – Who will you hatch? Features: Hatchimals live inside eggs. Hold them to hear their heartbeats, flip them for fun, tap and they’ll tap back. Hatchimals are for ages 5+ years. Requires 2xAA Batteries (not included).

WeLoveChristmas.co is a participant in the Amazon Services LLC Associates Program, an affiliate advertising program designed to provide a means for sites to earn advertising fees by advertising and linking to (“WeLoveChristmas.co”, amazon.com, or endless.com, MYHABIT.com, SmallParts.com, or AmazonWireless.com)

Cookies To make this site work properly, we sometimes place small data files called cookies on your device. Most big websites do this too.
Accept
Read more
This site uses cookies: Find out more.